When the final numbers were tallied, Golden Nugget showed $4.79 million in revenue, besting its own mark set in October 2016 by a shade over $700k.

December’s figures are the culmination of a recent upswing for the operator, one that appears to have kicked off when Live Dealer NJ games first went live on Golden Nugget Casino.

Is there a connection?

From January – August 2016, Golden Nugget averaged just under $3.24 million in monthly revenue. But since the first full month of Live Dealer in September, that average has swelled to nearly $4.09 million. 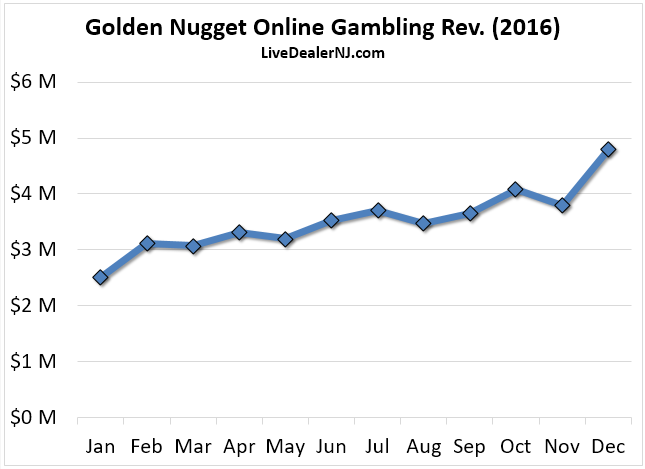 Based on this alone, there appears to be a clear correlation between the launch of Live Dealer and Golden Nugget’s revenue uptick. But there’s more to the story:

It’s arguable, even likely, that all of these factors played a more significant role in bolstering Golden Nugget’s revenues than Live Dealer games. Yet, that doesn’t mean Live Dealer didn’t play its part.

On their own, Live Dealer games probably don’t pull in much revenue for Golden Nugget. Despite a recent expansion, the games still only run during select hours, and there are a very limited number of tables running.

NJ Live Dealer blackjack online is particularly restricted, as there are only seven spots available per table. And generally speaking, the action is much slower than at digitally driven blackjack tables.

There’s a bit more flexibility with Live Dealer Baccarat and Roulette, which can service more players at once. Even still, there is only one table running for each game type.

However, Live Dealer may be driving revenue by less direct means.

For one, the format is unique to Golden Nugget Casino in New Jersey, placing the online casino at a competitive advantage.  It’s easy to see players that have difficulty trusting electronic table games being initially drawn to the site for Live Dealer, and eventually gravitating to the site’s many slot machines.

It’s conceivable that some players are starting off on Live Dealer, and moving to computerized table games for this exact reason. Or maybe they just crave faster action.

In short, Live Dealer is undoubtedly having some direct impact on Golden Nugget revenue, evidenced by the regular expansion of the product. But it may be the intangibles that are having the larger impact.

A longtime poker player, Robert DellaFave has written for various publications covering the regulated online casino and online poker markets in Pennsylvania and New Jersey. These include OnlinePokerReport.com, PlayNJ.com, PlayPennsylvania.com, and PokerScout.com.

View all posts by Robert DellaFave